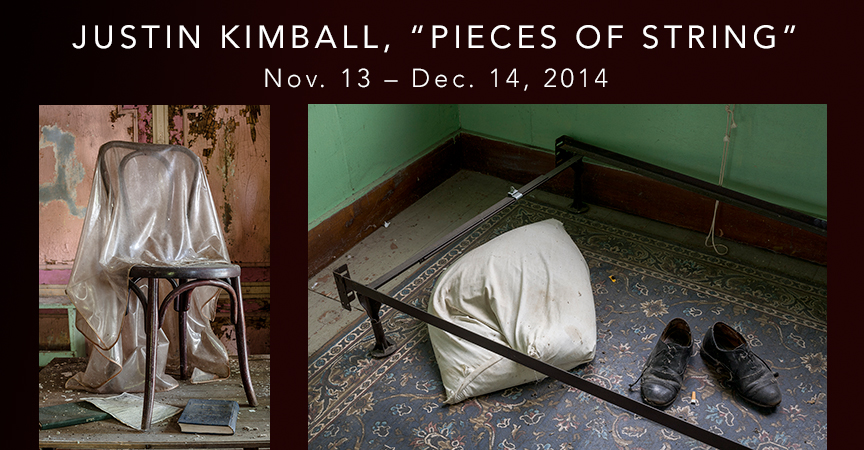 For four years Justin Kimball photographed in abandoned homes, hotels and buildings in the Northeastern United States. For much of this work he accompanied his brother Doug, an auctioneer, into the houses of the deceased or dispersed. While Doug cleared these spaces of items for potential resale, Justin sought within them the evidence of an individual’s life. Photographing “the smallest objects (a note, a box of hair pins, a stain on a pillow),” Kimball re-imagines their existence and relationship to the absent owners. “I use the camera’s descriptive power and the photographic illusion of truth to create the narrative and inspire feelings about its subject. The resulting photographs are my perception of what happened in those spaces: Who lived there? What was hidden and what was seen?” Justin’s 60 color photographs from this body of work are explorations of the minutiae of everyday life—a contemplation of our brief and humble legacies before they are cleaned up and cast to the wind.

Justin Kimball was born in Princeton, New Jersey, in 1961. He completed his M.F.A. in photography at the Yale University School of Art and Architecture and earned his B.F.A. in photography at the Rhode Island School of Design. He is the recipient of numerous grants and awards, including a John Simon Guggenheim Memorial Foundation Fellowship in Photography, the Aaron Siskind Individual Photographers Fellowship, and a grant from the John Anson Kittredge Educational Fund at Harvard University. His photographs have appeared in DoubleTake, Harpers, pdn (Photo District News), Photo Metro, and Picture magazines, and he is the author of Where We Find Ourselves (Center for American Places, 2006). His work can be found in numerous photographic collections, including the Corcoran Museum of Art, George Eastman House, J. Paul Getty Museum, Museum of Contemporary Photography, Museum of Fine Arts, Boston, Portland (Oregon) Museum of Art, and San Francisco Museum of Modern Art. Mr. Kimball has taught photography for more than twenty years at colleges and universities, including the Rhode Island School of Design, School of the Museum of Fine Arts, Boston, Orange Coast College, and Amherst College, where he is currently a professor of art. He lives with his wife, Maura Glennon, and their two children, Zeke and Ellie, in Florence, Massachusetts.

Want to join the discussion?
Feel free to contribute!